The legislative history of a law is comprised of the documents created during deliberations leading to the law's enactment. They are used to determine the legislature's intended purpose and to clarify any ambiguities in the language. - Gail Whittemore -

How a Bill Becomes a Law 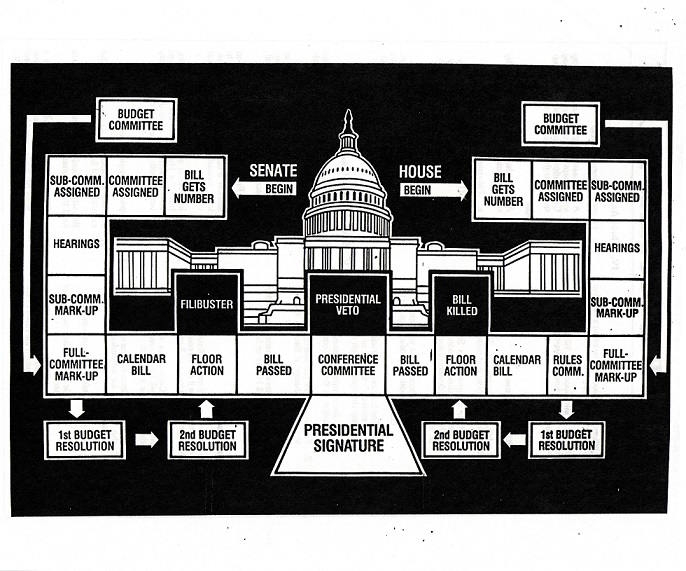 "Legislative history" refers to the background and events leading to the enactment of a statute, including hearings, committee reports, and floor debates.  Legislative history can be used to aid in interpreting the statute (Black's Law Dictionary).

A Bill is Introduced in Congress
The federal legislative process begins with introduction of a bill in either the House of Representatives or the Senate.  Bills are numbered sequentially as they are introduced.  The bill may be referred to a congressional committee for consideration.

Committee Hearings, Reports & Prints
Congressional committees may conduct hearings to gather facts, data, and expert opinions on the legislation. Bills referred to committees are amended in markup sessions. Committees issue reports when they vote favorably on bills. Committee reports are considered to be the most significant parts of a legislative history, because often include a Statement of the purpose of the legislation. Transcripts of hearings, witness testimony, committee reports, and supporting documents (committee prints) are parts of the bill's legislative history.

Floor Action & Debate
Bills reported favorably out of committee are brought up for floor action by the full House or Senate, where the bill may be debated and amended before being passed by that chamber. Congressional debates are also part of the legislative history of a bill. Once passed by one chamber of Congress, the "engrossed" bill is printed in the Congressional Record and referred to the other chamber of Congress.

Conference Committee Reports
The engrossed bill goes through the same process in the other chamber of Congress. The bill may be amended several times as it makes its way through Congress; if different versions of a bill are passed in the Senate and House of Representatives, a conference committee must be convened to work out a final agreed version.

Presidential Actions
The enrolled bill is sent to the President for signature.  The President must sign the bill into law within ten days, or may veto the bill and send it back to Congress with a veto message (a Summary of Bills Vetoed from 1789 - present is on the U.S. Senate website). To override a veto, two-thirds of the Congress must vote to override.

When the President signs a bill, he or she may issue a signing statement. The law takes immediate effect when signed.

The new law is assigned a Public Law number and published as a "slip law." New laws are published immediately online; in print, after publication of individual slip laws, all laws passed in each session of Congress are published sequentially in the United States Statutes at Large.

The legislative process followed by most state legislatures is roughly the same as the federal process.