Factory farms are designed to be low cost with maximum output.  The result is often hundreds of thousands of animals confined to dark, cramped, poorly ventilated areas.  Without access to fresh air, sunlight, or grass while being held in close proximity to other animals, these animals often develop health issues as well as physical and mental problems.  Employees are often overworked and under trained, resulting in mishandling and mistreatment of the animals.  It is common practice for male chicks to be ground alive or suffocated in the egg-laying industry due to their inability to lay eggs.  In the hog-farming industry, baby pigs are castrated, their tails are docked, and their tusks are clipped without any pain killers.  Female cows in the dairy industry are forcibly impregnated, and male calves are taken from their mothers, often at birth, to be fattened and slaughtered for veal.  Standard industry practices such as these are accepted and even protected under the law. 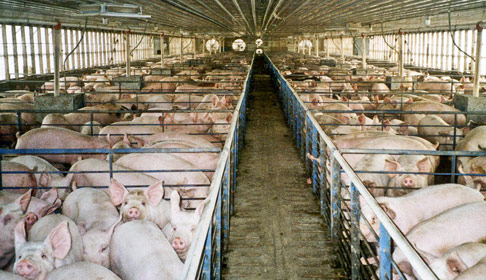