New York City first began the process of environmental review with Executive Order No. 87 in 1973, as a response to the National Environmental Policy Act (NEPA). In 1975, the New York State enacted the State Environmental Quality Review Act (SEQRA), requiring state and local governments to assess the environmental impacts of discretionary actions. In response to SEQRA, Executive Order No. 91 established City Environmental Quality Review (CEQR) in 1977. Initially, there were two co-lead agencies, the Department of Environmental Protection (DEP) and the Department of City Planning (DCP). The CEQR was greatly modified in 1991 by the addition of CEQR Rules of Procedure and a system not with two co-leads, but where each agency acts as a lead agency for the projects it funds, approves, or directly implements. 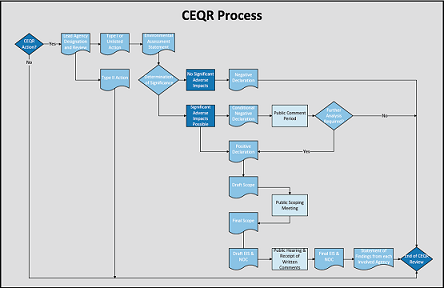