During the fall 2020 and Spring 2021 semesters, some of the library services will be modified to address the effects of the COVID-19 virus. Check the Law Library web page for updates (http://law.pace.edu/library)

Although the United States is traditionally and historically considered a common law country, the number of laws passed by legislatures is increasing. Statutes are laws enacted by the legislative branch of the government. Statutes are primary authority and take precedence over case law. The general pattern for publication of statutes begins with the publication of slip laws and ends with the laws being codified in an annotated code.

First-year legal skills classes focus on the specifics of the legislative process and publication of federal and New York statutes. Each state organizes its statutory codes differently. Once you understand the general pattern of how statutes are created, published, and later codified, you should be able to apply this basic understanding in any jurisdiction and be able to work with the statutes in that jurisdiction.

In your upper-level law school classes, you become familiar with the federal and state regulatory systems, where the legislature has delegated authority to executive agencies to implement the purposes of legislation. Regulations have the force of law and are the third category of primary legal resources in U.S. law. 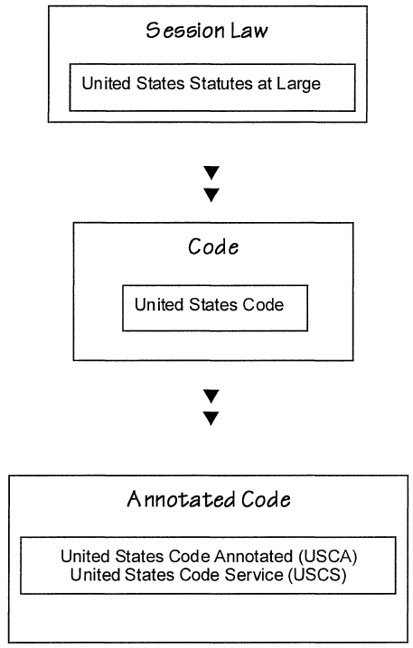 “All Legislative Powers herein granted shall be vested in a Congress of the United States, which shall consist of a Senate and House of Representatives.” U.S. Const. art. I, § 1.

Federal laws are passed by the U.S. Congress (U.S. Senate and U.S. House of Representatives) and preempt state laws on the same subject. State laws are passed by state legislatures (in most states, the State Senate and Assembly). Statutes are primary authority and take precedence over case law and administrative regulations. 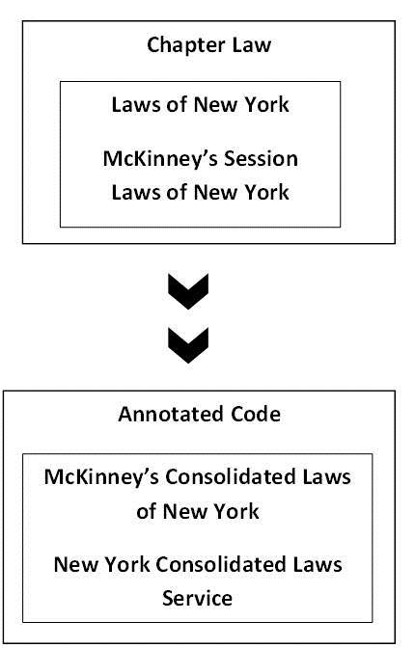 After a bill is enacted by Congress and becomes a law, it is published. Laws can be public (affecting all people) or private (passed on behalf of an individual). Public Laws are numbered consecutively by date of passage and the Congress in which they are enacted, and abbreviated as Pub. L. No. For example: Pub. L. No. 114-11, the Energy Efficiency Improvement Act of 2015, was the 11th law passed in the 114th Congress.

The first publication of a new law is called a slip law, after the page or pamphlet in which new laws were first released before the invention of the Internet. Federal slip laws are shelved on the third floor of the Law Library as they are received.

Session laws are then codified and published in a statutory code. Codification is the process of editing and organizing public laws by subject matter to make statutory research easier.

The United States Code (U.S.C.) is the official compendium of the general and permanent laws of the United States, organized into subject matter titles. The Code contains fifty-four subject titles published by the Office of the Law Revision Counsel of the U.S. House of Representatives.

First published in 1926, the U.S. Code is published every six years in a new print edition. The most recent is the 2018 edition. In between editions, annual cumulative supplements are published containing laws and amendments enacted since the last edition.

These unofficial codes are annotated with many research aids, including legislative history information, explanatory notes by legal experts, cross-references to secondary sources and regulations, and citations to cases relevant to each statute. The U.S.C.A. and the U.S.C.S. are available on Westlaw and Lexis, respectively, and in print on the third level of Elisabeth Haub Law Library. 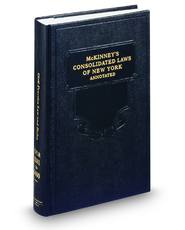 New York statutes can be found on Westlaw and Lexis. They can also be found for free at the New York State Legislative Information website.

The multi-volume set of McKinney's in print is available on the third level of the Elisabeth Haub Law Library.